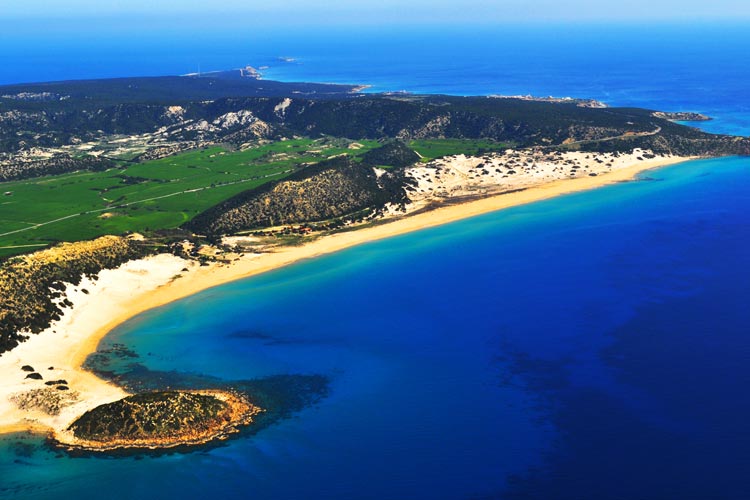 Karpas is the long promontory head land region at the north-eastern end of Cyprus island.

During the history, Karpas peninsula in which you can see the most beautiful beaches of Cyprus and mediterranean has been a place where the ones who want to run away from the civilization or retreat could find peace. In Karpas peninsula which was mentioned in the book of the famous botanist, holmbe, as “the pharmacy of cyprus” due to its rich flora, you will discover a different feature and beauty each day and you will not be able to stop yourself to fall in love with it.

Golden beach which is not only one of the most beautiful beaches of cyprus but also of mediterranean is one of the places which contributed to the reputation of karpas region. With the tranquillity and wilderness of this giant beach comprised of kilometres of length and very fine golden yellow sand, it is the beach that caretta caretta sea turtles in mediterranean prefer to lay their eggs.

This region where a donkey type that only lives in cyprus freely live in herds undomesticated becomes very green especially in march and april and all the fields become covered with yellow daisies that are the harbingers of the spring.

At the tip of the karpas head land, there is a monastery that is built in the name of Apostolos andreas (st. Andrew) who is one of the most important christian saints. The history of Apostolos Andreas Monastery which is a very old historical structure is as follows:

Saint andreas debarked by anchoring on a rocky region of this head land, guiding the ship crew who were thirsty and sick after a long ship journey. In these rocks where it was nearly impossible to find fresh water, saint andreas touched the stick in his hand to a point and suddenly fresh water started to be spilled out from the ground. The crew who drank this water was healed, even the eyes of one of them who was blind were opened.

Since then, it is said that the water flowing from this fountain helps various diseases. Every year, in religious holidays, hundreds of greeks coming from the greek part of cyprus by buses worship in this monastery and drink water from this fountain. They take this water believed to be holy and medicinal to their homes by filling out the bottles, bins. In addition, they take vows, make wishes by burning candles in interesting ways.

Karpas is also the name of the village in this mountainous region. It is still possible to meet a small number of greek populations in the village who do not move to the south and continue to live in northern cyprus.

Dipkarpaz Village is one of few settlements that Turkish and Greek people live together in Cyprus. This historical village is established by Karpasians in the Byzantine era who were constantly sacked and harassed by arabic invaders and who found the solution in retreating into the inland. Karpasia ruins were used as construction material in the construction of the village.

The things that Dipkarpaz visitors have to do are; Altınkum which is one of the most beautiful beaches of the Mediterranean, Apostolos Andreas Monastery which is one of the most important vow places both for Greeks and Turkish people, Karpas National Park with a coastline of 95 kilometers and 65 km of length, rich flora and fauna, Ay. Philon Monastery which has great importance in the diffusion of christianity in the island, Ay. Philon dunes or also known as saklı sahil which is the third most important spawning area of the green turtles in mediterranean, endangered audouin’s gull and klides islands (composed of 6 little islands) which are very important breeding grounds of the shag.