Visitors have been coming to the easternmost island in the Mediterranean for thousands of years. They did not always come looking for North Cyprus holidays with endless sunshine, golden beaches or places of great historic interest! They came with more warlike intent but it is thanks to those visitors, conquerors, traders and empire builders that the island is blessed with such a rich and wonderful heritage for the visitors of today to enjoy.

The island of Cyprus, divided now by a political inability of the two endemic peoples to compromise and agree, has a border that stretches across the middle, with Turkish North Cyprus occupying the upper one third. Luckily for the tourists who flock to these shores the division has little impact on where they can go or what they can see. The border permits free access to all citizens of the EU and crossing it is simple whether on foot or in a car. Thus many holiday companies specialising in Northern Cyprus holidays will fly their clients into one of the airports in South Cyprus and then transport them to resorts in the North.

Arguably the North of the island is the less developed and retains many areas that seem untouched by any human intrusion. Swathes of forest-clad mountains are home only to the birds, such as falcons, sparrow-hawks and buzzards and wild animals that include the long eared hedgehog, fox and many species of lizard and chameleon. These forests are a perfect habitat for the abundant variety of flora for which the island is famous. Every spring season sees the island emerge from dull drab brown into the verdant colours of a new growing year. As the bright yellow of the Oxalis pes caprae carpets the olive groves followed by the deeper gold of the Crown daisy that covers all the ancient sites with a warm glow, the fields of the great Mesaoria Plain which is known as the “bread-basket” of Cyprus are blanketed in the many shades of green from the crops that will turn into the grain harvest to feed the island’s human and animal population. The growing season is beautiful, enticing and short lived because by May the harvest will be over and the never ending sunshine of summer will dry the ground and warm the crystal clear sea. It is for the delights of swimming in the Mediterranean that so many visitors come to Cyprus again and again. From June until November, during a typical year, the sea is calm as a mill pond and safe for even the most unconfident swimmer. There are many water-sport activities from diving, power boat racing, water skiing and sailing for anyone who wants to be active on holiday and there are plenty of local businesses run by professionals with all the necessary safety qualifications. And after such energetic activity, there are beaches and beach bars where they can relax and unwind with a cool brandy sour as they watch the sun set far out to sea.

North Cyprus is often described by first-time visitors and travel writers, as a country where time has stood still, this is particularly evident in the less well-inhabited areas to the far west and east. That part of Cyprus in the west, around the town of Guzelyurt is predominantly agricultural and tourism has barely touched it. Here is the “Fruit basket” of Cyprus. This is the area where the citrus fruit is grown. The roads to left and right are bordered by well- tended orchards growing grapefruit, mandarins, oranges and lemons. Fruit so plentiful that it presents a dazzling array of laden branches as the pickers go to work filling baskets for the juice industry, the local markets, or for export. This same fruit can be bought from the roadside sellers for virtually nothing and it tastes all the better for that! Freshly squeezed orange juice can also be bought from the same stalls during the season, far superior to any shop-bought, mass-produced juice from a bottle or carton. Very early in the year the strawberry fields around Yesilirmak give off a heady scent in the warm sun-filled air. These are strawberries that taste sweet as honey, with the rich red colour of fruit that has properly ripened in the warm benevolent sun. 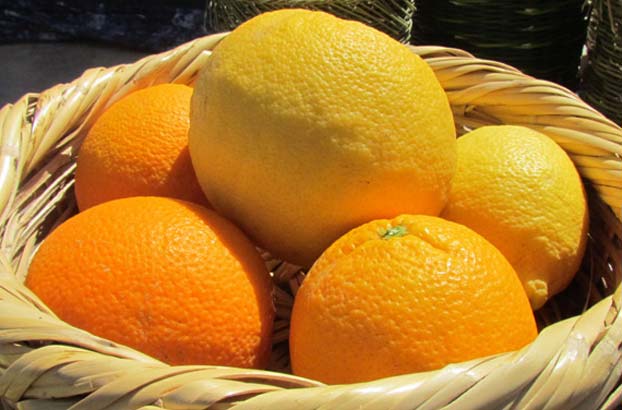 There are villages set high in the mountains which are wonderful places to explore on foot. Their little narrow streets were made long before the invention of the motor car. These little winding lanes can just about accommodate a donkey with panniers well laden stretched across its back. Though rarely seen in this modern day, the distant villages of the Karpaz peninsula, the eastern “Panhandle” still use this ancient form of transport to move goods around the villages, and in fact the donkey is known as the Cyprus tractor. This humble willing creature has been used as a beast of burden for many hundreds of years and it may well carry household shopping, bundles of firewood or sacks of carob beans and olives.

Two of the prettiest villages in North Cyprus are Karaman, high in the mountains to the west of St. Hilarion Castle where dozens of narrow paths make a circuitous route to the village centre and the church that dominates the square. Also here is the “Crow’s Nest” pub which is where so many of the village inhabitants congregate for a cooling drink and convivial chat. The village of Bellapais is situated to the east of Kyrenia and is set on an eminence in the mountain range where it overlooks the town below. Bellapais Abbey is the most beautiful ruin in Northern Cyprus. Dating variably from the 13th – 15th centuries, parts of this superb example of Gothic architecture include the church and refectory. The former is no longer used for Orthodox Christian worship but is open as a museum while the latter is now mainly used as a concert hall, especially during the annual International Music Festival. Bellapais village is famous for being the subject of “Bitter Lemons” the definitive retrospective on life in Cyprus written by Lawrence Durrell after his time in the country during the 1950’s. Time may have stood still in some parts of Northern Cyprus but in others there is much of modern life for tourists to enjoy. There are night clubs and discotheques as well as Casinos and excellent restaurants providing world-wide cuisine. The beach resorts provide all that is up to date with not only outdoor pools but also heated spas, exercise and fitness centres, massage rooms, hair salons etc. In fact all that anyone could possibly want if looking for a holiday that includes pampering on a luxury scale.

Somewhere in North Cyprus is the holiday for even the fussiest and most discerning of tourists. Seek and you will find..................